As 2014 closed and we move into 2015, we are seeing quite a bit of price fluctuation and buyer uncertainty in the real estate marketplace. Some of the gain seen in the first half of the year was lost in the 2nd half of 2014 as the market softened a bit. Fortunately interest rates remain 1.2% lower than predicted, which should reassure any buyer about buying now. Rates are at 3.87% for a 30-year conventional fixed mortgage according to our local Wells Fargo lender, Doug Magit. These are historically some of the lowest ever, indicating that our market isn’t so strong yet to weather the higher interest rates after so many years of decline from 2006-2013. Prices have been increasing in major markets since 2012, but other smaller, outlying markets bottomed as late as 2014 and are still at their bottom now. What does all this mean for moving forward?

Due to HELOC and HAMP resets in 2015, REO starts are up 6% this year and we are expecting another round of foreclosure properties to be hitting the market in 2015. It is difficult to say how many we will see in Inyo & Mono Counties, but it is safe to say that they will play a role in keeping prices from increasing too quickly. Appraisals will still come in low in certain scenarios, which is the main deterrent to purchasing a nicely improved property over market value. Only the best deals were purchased throughout the year, as buyers are still wary of overpaying for property and concerned about appraisal values matching sales price for lending requirements. The total percent of list price/sell price ratios was much worse than at the close of 2013. The total number of listed vs. sold properties was a much looser ratio as well. Total listed days on market of sold properties has increased over last year as well.

So if you’re interested in a private list of short sales and foreclosure opportunities in Mono & Inyo Counties, please give me a call or email and I will provide this to you for your exclusive perusal. Until then, happy house hunting. If you’re interested in Auction opportunities, please give me a call as well and I’ll show you any available in the area and personally guide you through the process. 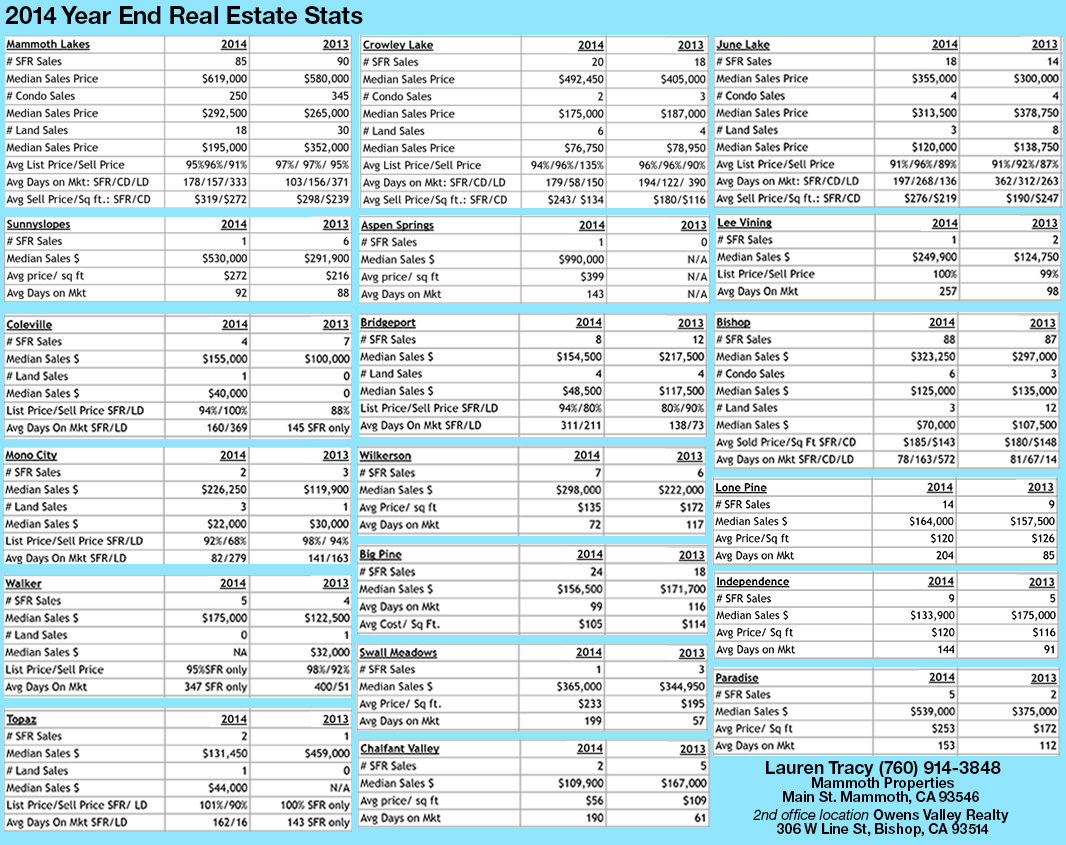